We had not expected the mass grave in the backyard of our host’s home when we planned our spring break outing last month.

A few weeks earlier we had received an e-mail from a family of seven who after reading our booklet, The Freak, wanted us to know that they also had built a house for Jesus and that if we ever wanted to come and stay in their guest apartment, we were more than welcome.

It was an unusual invitation since we’d never met the family before (the father had picked up our booklet at an outreach). We packed our bags and drove to their small village in South Czech. Their kids, who were in similar age as ours, probably wondered why their parents invited foreigners into their home.

The mom had made a delicious Czech goulash meal for lunch, and we brought our tortillas, beans and avocado and made burritos with chips and salsa for dinner. Their kids liked our “pancakes” as they called it, and one of their girls even tried our not so spicy salsa.

And even though they didn’t speak English, we learned that their village was once a Sudetenland village, which was largely inhabited by Germans prior to WWII. When the Nazis lost the war and the Russian soldiers arrived, the homes and possessions of Germans were looted and destroyed.

And it was during this horrible time in history that 18 Germans committed suicide right next to the Catholic Church and they remain buried there next to the church, which lines one side of the yard where we stayed.

There were other atrocities that happened. All the Germans had to leave the village with only one suitcase in hand. 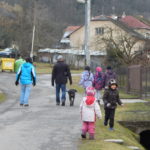 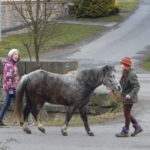 And we could sense the sorrow hovering over the village as we walked through it. The family we visited told us that they were the only believers in the whole village of 600-some inhabitants.

The kids played and watched movies and we shared stories about our lives and God’s faithfulness and the difficulties of raising children in an atheist culture and prayed together. We left the next day to go skiing in the mountains, thankful that we had responded to the invitation. We are expecting them to visit us in our home later this spring.